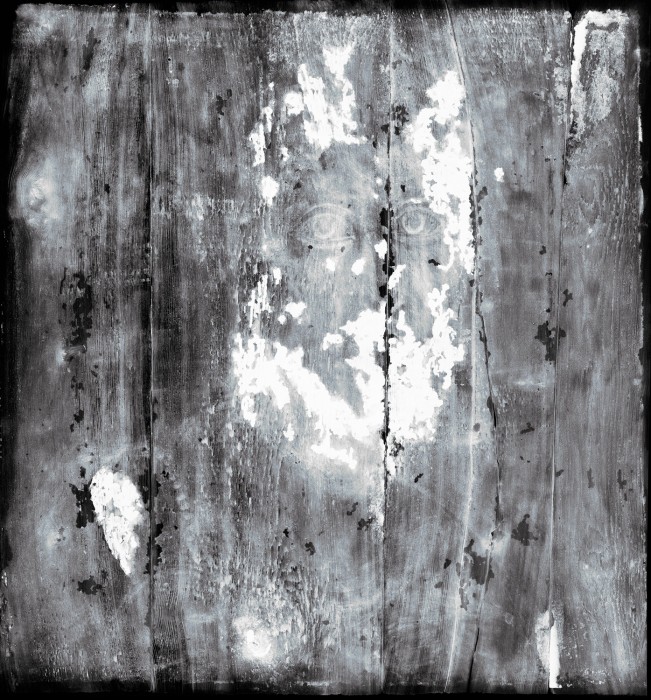 During a residency at the Getty Research Institute, I began to investigate ways in which technology permits us to see what has been previously invisible. I spent time in the painting conservation lab, imagining that I would consider microscopy of paintings as subject matter for my own work. I observed the art conservators at their tasks, cleaning medieval altarpieces with cotton swabs moistened with their own saliva.

One day, as I came into the conservation lab, I was confronted with what appeared to be an enormous abstract expressionist drawing taped to the window. It seemed like something that Franz Kline might have made. Beside it, on an easel, was a rather drab landscape painting. I learned that the painting was by the 19th century landscape painter Charles-François Daubigny, and that it was the source for the x-ray that was using the window to illuminate it. The vast discrepancy between the x-ray and its source, and the dynamic energy seething in that x-ray image, sparked my imagination.

I began to ask questions about how conservators used x-rays, and what archives of x-rays of artworks existed within the Getty. My series History’s Shadow utilizes x-rays of three -dimensional objects as their own source material. Ultimately, I returned to the idea of examining x-rays of paintings, and found a completely different formal vocabulary with which to work. In Shadow Painting, the x-ray considers the canvas, the support structure of the painting, and the wood of the altarpiece – the material itself from which the artwork is made– as well as the ghostly, spectral images that seem unearthed from some distant, mysterious realm. The final images feel made of layers of history and time, and give form to the ways in which painting and photography are inextricably intertwined.