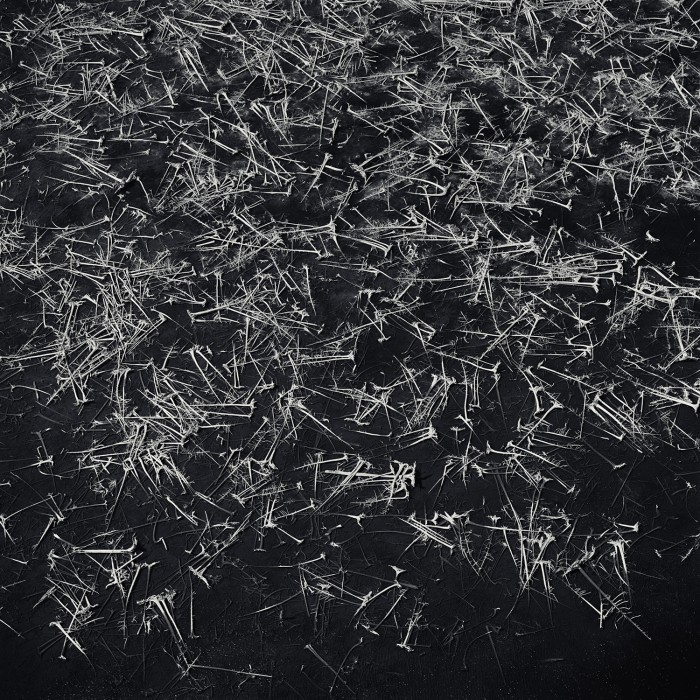 A skyline is a wire cable stretched between two points. The line between these points is called a chord. Divide sound into different notes, play them all at once. No. This chord exists to knock over trees. The other to throw music into the air. A tightrope, too, yes? Yes, the call and response between physics and geography, between how I thought life would go and how it did, is unwitnessable. We make music with the sky and it all falls down.

A bell is a type of choker hook. The Forest 12 (page 48) rings off to the corner of the frame, logs floating like a fugue in resonant atrophy. I want a repeating melody, a memory, an echo at least. Logjam, stillness, it is not the sounding of a bell in the chamber of earth. It is quiet here in these photographs.

The images in The Forest are a finger across a scab of earth, across the vacancy of what’s left. In The Forest 8 (page 53), water shimmers, glinting the sun, the play of grays—if looked at strictly as a study in form, it is beautifully choreographed. If infused with content of place, it is horrifying. How is it the same image harbors, with equal validity, such disparate clarity? It is reflective of an equally dichotomous timber industry, existing to gather what we people consume, need, want, but doing so, as in this case, with shallow intention, without regard for home.

A chance is a logging operation. Blackjack with history by way of dice and carriage riggers. Fell and buck, fell and buck, roll and scoop, throw again. Dots on a white cube, lines on a map, bleached out trunks in black water. The Forest 13 (page 61) is an exhale of root balls, branches, trunks, mud.

What is salvage value? What does the mapping of stripped land look like? These photographs, through this visual medium, reveal what decimation feels like. When searching for landmarks, it’s etymology, evidence it’s not just words that carry memory, but the space left when it quiets, the assumption of miracles, the derivative of a terrain. But this is not what these pictures show. This is not what these pictures show. The ballasts have toppled, and gravity insists everything falls down.

In the old days it was saws and axes. And semantics, survival by story. Now there are yarding towers, slackline systems, portable chippers, and land ownership classes. Delimber slasher buncher multifunction machines, clam-bunk skidder loaders. Words. So many words, the politics of the sound of destruction; of misplaced power; of floating, dead trees.

A sentence in a harsh and guttural language. The Forest 11 (page 57) begins in the top left corner and builds with content across the frame, ancient groves as stacked sticks, modifiers, adjectives, dangling participles. A face is one side of a tree or logged mountain. Turn the face from the sun.

A running skyline is a log-hauling system with three suspended moving lines. It is 1986, I’ve been running almost daily for five years at this point. On the other coast, some thirty-two hundred miles from me in an almost straight horizon line across the country, uprooted trees spill and push together against the waterway edges of northern Maine, abandoned log flows that, seen from the sky, are loose handfuls of map pins thrown and scattered across some smoothed-out map spread across a table. Architects of geography, timber companies made choices to abandon log dumps and render once living trees, slash. Decipher reasonable analogies from this: the sum total of the difference between then and now: interpretation: a trail of gravity.

It is 2012, I’ve been running almost daily for thirty-one years. My days have accumulated like felled trees, and I run away from them, every morning at about 6:30. In the summer I leave the house even before this because the light seeps under the doorjamb of the horizon earlier and I need to be under the sky when it changes. This morning the light went from black to dark gray to light gray to white, as it always does, doesn’t matter if sheathed in drenching Portland rain or winter fog, it always lightens, I never understand how, but I’m always, by the end of my run, in light. It’s the only thing I trust. Earlier today the skyline was a lot like the archaeology of story told through these photographs, the black water and the edges of earth holding what remains, holding the evidence of what was lost. We lose things, but they end up somewhere, gone to us perhaps, but still somewhere. I have to believe that and running reminds me.

In Maine, as in Oregon, clear-cutting was once common practice. As was shifting perspective, logging companies leaving “green strips,” bands of standing trees ringing the rivers and streams, so that anyone viewing the forest from the water would not see to the desolated land beyond the vantage point, to the whole-tree clear-cuts. The geometry of perspective is the legacy of the treaties we make with truth and untruths, with big industry and the land. Impermanence moves the demarcation lines of memory, of a forest, of where things stop and begin. On my run this morning, I think about how it also blurs how we remember the people and plans we’ve lost. Eventually everything becomes shards and fragments, floating impressions like loose trees traveling a waterway until hitting land. It is 6:45 a.m. and all the shoulds in the world line up like pennies.

I wait until it’s light enough to enter the park where the trees hover. I circle around and around and around, the soft earth feels good on my legs, and I hear birds singing in the homes of their trees. On my run today, it’s early winter, and the leaves are soggy, they’ve almost all fallen down, the city hasn’t yet collected them. It smells damp, like dirt and forgotten things. The maple leaves are inverted stars, and I’m running on some kind of sky. It is 7 a.m. and I want to quote the sky: progress can be summed up in noticing birds.

With seventy miles of trails, spread out over five thousand acres, Forest Park in Portland, Oregon, is the largest wooded urban park in the United States. Mostly second-growth with some old-growth, the forest holds 112 bird species, over 60 mammal, and me. Running under these trees is the only thing I know how to do. The assumption of miracles is what I demand of the sky, the Douglas fir, western hemlock, and red cedar, now, and each morning.

Forest fieldnotes: arpeggios of trees, branches and boughs, enmeshment of instinct and evolution, witnessing. Maisel put himself in the sky, above the earth I run across, he looked down and caught the difference between utilized and used up. Because they are not the same. And that is what The Forest evidences. And if the politics of land use has diverged to such vacancy of foresight, the vulgarity of such thinking repudiates consolation. I am not comforted by these photographs. Memory is a derivative of loss. And when things—plans, dreams, people, trees—are lost, then they are gone. It is simple: apocalyptic.

In The Forest 4 (page 47), a ribbon of waterway splits the image in half, a meandering black line in the sand. There is the literal, the aesthetic, there is the burrowing question of conscience. In the end, basic physics strips away technicalities and ethics to straightforward cause and effect. We blanched the earth. And in doing so, removed the light, the color, the top layer—literally, aesthetically, and with lack of conscience. And so this black line in The Forest 4 runs on past the image frame. To? The inventory of logging terminology must include morals. It is 7:30 a.m., 1986, I am looking up. It is 7:45, 2012, I am still looking up. And straight out across to the horizon. And at a series of photographs holding lost geography and remnants of inarticulation. They are more relevant now than at any other time. And I am running on the skyline, in the wilderness that is still here, that is left, and I am trying to forgive.